ICP, pioneered by Han’s group, applies an electrical field to membranes above and below a channel of flowing water. 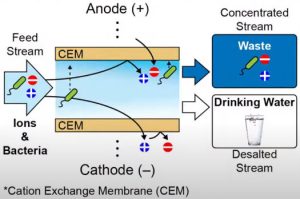 The membranes repel positively or negatively charged particles – including salt molecules, bacteria and viruses, according to the university. These attracted charged particles are directed into a waste water stream for discharge.

It also removes dissolved and suspended solids. “Since it only requires a low-pressure pump, ICP uses less energy than other techniques,” said MIT. ICP does not always remove all salts in the middle of the water channel, hence the electrodialysis step to reduce residual salt ions.

Machine learning was used to optimise the ICP/electrodialysis ratio, with the proof-of-concept having a two-stage ICP process, followed by a single electrodialysis stage which “minimised energy usage while ensuring the process remains self-cleaning,” said MIT. 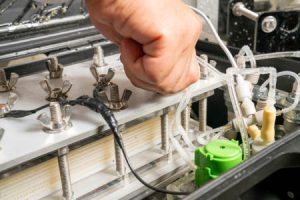 “While it is true that some charged particles could be captured on the ion exchange membrane, if they get trapped, we just reverse the polarity of the electric field and the charged particles can be easily removed,” added fellow researcher Junghyo Yoon.

For simplicity, ICP stacks have been modularised: with six modules in the first stage then three in the second.

Water with 2.5-45g/litre of salt (brackish to seawater) can be turned into World Heath Organisation grade drinking water at power consumptions ranging from 0.4 to 26.6Wh/litre.

Designed to be operated by non-experts, the <10kg prototype (see photos) has a single button to initiate desalination and purification, plus notification to indicate when salinity and particle count are acceptable for drinking. It has been demonstrated producing drinkable water directly from the sea at 0.3 liter/h for 20Wh/litre.

“This is really the culmination of a 10-year journey that I and my group have been on,” said project leader Han. “We worked for years on the physics behind individual desalination processes, but pushing all those advances into a box, building a system, and demonstrating it in the ocean, that was a really meaningful and rewarding experience for me.”

The work has been published as ‘Portable seawater desalination system for generating drinkable water in remote locations‘ in Environmental Science & Technology – the supporting information can be viewed without payment.